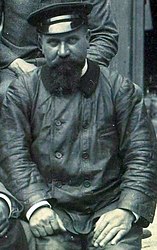 Gustave Adolphe Clément, from 1909 Clément-Bayard (22 September 1855 – 10 March 1928), was a French entrepreneur. An orphan who became a blacksmith and a Compagnon du Tour de France, he went on to race and manufacture bicycles, pneumatic tyres, motorcycles, automobiles, aeroplanes and airships.

In 1894 he was a passenger in the winning vehicle in the world's first competitive motor event. Albert Lemaître's Peugeot was judged to be the winner of the Paris–Rouen Competition for Horeseless Carriages (Concours des Voitures sans Chevaux).

As a result of selling the manufacturing rights to his Clément car he added Bayard to the name of his new business. The company name honoured the Chevalier Pierre Terrail, seigneur de Bayard who saved the company's town of Mézières from an Imperial army during the Siege of Mézières in 1521.

In 1909, five years after the successful launch of the Clément-Bayard automobile brand, he applied for and obtained the consent of the Conseil d'Etat to change his name and those of his descendants to Clément-Bayard. Clément-Bayard was appointed a Commander of the Légion d'honneur in 1912.

Most of his manufacturing empire was destroyed by World War 1, by German ransacking, by conversion to war production for France, and by the subsequent weak economic market. In 1922 the Clément-Bayard company was sold to André Citroën and the factory at Levallois-Perret was the centre of 2CV manufacturing for the next 40 years.