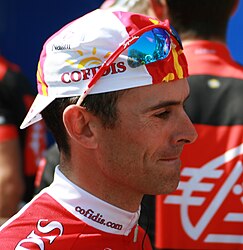 Stéphane Augé (born December 6, 1974 in Pau) is a French former road racing cyclist. He is currently a sporting director for UCI Professional Continental team Cofidis. While he had a contract to ride competitively with them in the 2011 season, he chose instead to retire as a cyclist and fill an opening in the team's management. He was known to be part of the escapees in every first stage of the Tour de France.