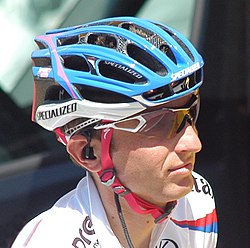 Tadej Valjavec (born 13 April 1977 in Kranj) is a Slovenian former professional road bicycle racer, who last competed for the Sava team. He is well known as a good climber due to his rides on mountain stages in the Giro d'Italia. Although he has achieved relatively few professional wins in his career, he has consistently performed well in the Grand Tours, with three top ten and four further top 20 finishes.