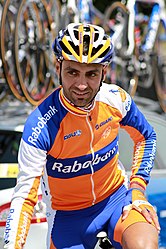 Juan Manuel Gárate Cepa (born 24 April 1976 in Irun) is a Spanish professional road racing cyclist, who last rode for the Belkin Pro Cycling team. He is perceived to be a climbing specialist, and to date his greatest achievements have been in the Giro d'Italia, where he placed fourth overall in 2002, tenth overall in the 2004, fifth overall in 2005 and won the Mountains classification with a seventh overall at the 2006 Giro d'Italia. He also won the Spanish National Championship road race in 2005. He has also won stages in the Tour de Suisse, the Vuelta a España, the Giro del Trentino and more recently he finished first on Mont Ventoux in the penultimate stage of the Tour de France 2009.

In February 2014, it was announced that Gárate had backed out of a contract with Belkin Pro Cycling.