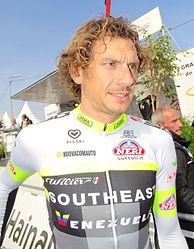 A northern classics specialist, Pozzato finished in second place at both the 2009 Paris–Roubaix and the 2012 Tour of Flanders. Pozzato finished a total of 37 Monument classics, including a victory in the 2006 Milan–San Remo; he finished second in the race in 2008 as well. Pozzato also won stages at the 2004 Tour de France, the 2007 Tour de France and the 2010 Giro d'Italia, and was the winner of the 2009 Italian National Road Race Championships.