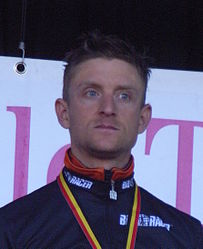 Roel Paulissen (born 27 April 1976 in Hasselt) is a Belgian former professional mountain biker. Throughout his sporting career since 1993, he has won more than ten Belgian national championship titles, mounted top-five finishes at both the European and World Cup series, and claimed a total of four medals, including two golds, in men's cross-country race at the UCI Mountain Bike World Championships. Paulissen also represented his nation Belgium in four editions of the Olympic Games (1996, 2000, 2004, and 2008), where he competed in men's mountain biking since it officially became an Olympic sport in 1996. By the start of the 2010 season, Paulissen had been overshadowed by a doping issue after he tested positive for clomiphene that sidelined and effectively ended his mountain biking career. Having lifted a two-year suspension from doping in early 2013, Paulissen came out from his short retirement to join and race professionally for the Italian team Torpado.