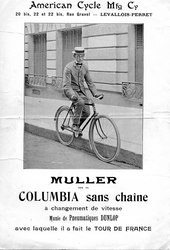 Rodolfo Muller (12 August 1876 – 11 September 1947) was an Italian racing cyclist and sports journalist. He finished sixth in the 1898 Paris–Roubaix, but his best season was 1902 with podium finishes in Bordeaux-Paris, Marseille-Paris and the Italian Corsa Nazionale. In that same year he also won the Concours de Tourisme du TCF, the first ever race to include the iconic Col du Tourmalet mountain pass.