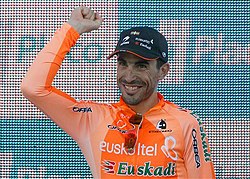 Egoi Martínez de Esteban (born 15 May 1978 in Etxarri-Aranatz, Navarre) is a Spanish former professional road bicycle racer, who competed as a professional between 2001 and 2013. In his first Tour de France, Martínez finished 41st overall at the 2004 Tour de France.

Martínez retired at the end of the 2013 season.