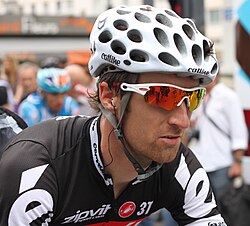 Daniel Lloyd (born 11 August 1980) is a retired English, professional road racing cyclist from Christchurch, Dorset. In 2007, Daniel Lloyd signed a contract with DFL-Cyclingnews-Litespeed for whom he rode for one year. He was a member of the Irish An Post–M.Donnelly–Grant Thornton–Sean Kelly team in 2008. In 2009 he joined the Cervélo TestTeam. After his contract expired at the end of 2011, he signed for the British Team IG–Sigma Sport. In November 2012, Lloyd announced his retirement from professional cycling, and he became assistant directeur sportif at IG-Sigma Sport.

Lloyd won the Vuelta a Extremadura overall in 2008 and stages of Tour of Siam and Tour of Qinghai Lake in 2006.

Lloyd also works as a broadcaster for Eurosport's cycling coverage and the Global Cycling Network. Since 2012, he has been the international English finish line commentator for Giro d'Italia.