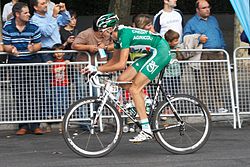 Yannick Talabardon (born 6 July 1981 in Paris) is a French former professional road bicycle racer, who competed as a professional between 2002 and 2013. He won the Most Combative rider award for Stage 7 of the 2011 Tour de France for his role in the early breakaway.

Talabardon retired at the end of the 2013 season, after twelve seasons as a professional.