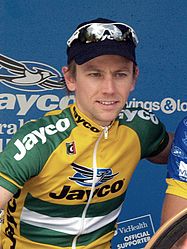 Trent Lowe (born 8 October 1984, in Melbourne) is a professional road bicycle racer from Australia. He rode for Garmin–Transitions on the UCI ProTour from 2008 to 2010. Lowe was one of only two Australians on the Slipstream Squad, the other being Chris 'CJ' Sutton who came from Cofidis in 2007. The former full-time professional mountain biker had a breakthrough year on the road in 2005 riding for the US domestic team, Jittery Joe's, where he caught eye of Discovery Channel sports manager Johan Bruyneel. He was signed for Discovery Channel for his superior climbing abilities. In 2002 he won the UCI MTB World Junior XC Championship, then he won the under-23 Australian National Mountain Bike Championship in 2003 and 2004.

Following two seasons of injury and chronic fatigue, the young climber signed with the new Australian team, Pegasus, before the announcement that they had failed to obtain a 2011 UCI World Tour license.