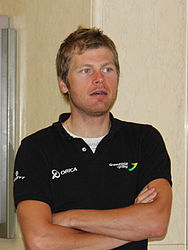 Christian Meier (born February 21, 1985) is a Canadian former racing cyclist who rode professionally between 2005 and 2016 for the Symmetrics, Garmin–Chipotle p/b H30 and UnitedHealthcare and GreenEDGE teams.

Born in Sussex, New Brunswick, Meier is descended from German restaurateurs who settled outside Sussex, Canada and he attended Sussex Regional High School. His brother Michael succumbed to cancer in 2010. He raced for GreenEDGE in 2012, competing in the Giro d'Italia in May, with his best showing on Day 11 in 15th place. He rode all three Grand Tours in his career, making a total of five Grand Tour starts, his last being the 2014 Tour de France. He announced his retirement from competition in September 2016, despite having a year to run on his contract with the Orica team. After retiring, he contested the 2018 Canadian National Time Trial Championships, finishing 27th.