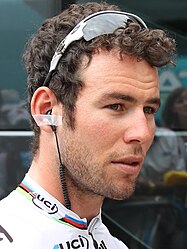 Mark Simon Cavendish (born 21 May 1985) is a Manx/British professional road racing cyclist who currently rides for UCI WorldTeam Quick-Step Alpha Vinyl Team. As a track cyclist he specialises in the madison, points race, and scratch race disciplines; as a road racer he is a sprinter. He is widely considered one of the greatest road sprinters of all time, and in 2021 was called "the greatest sprinter in the history of the Tour and of cycling" by Christian Prudhomme, director of the Tour de France.

In his first years as an elite track rider, Cavendish won gold in the madison at the 2005 and 2008 UCI Track Cycling World Championships riding for Great Britain, with Rob Hayles and Bradley Wiggins respectively, and in the scratch race at the 2006 Commonwealth Games riding for Isle of Man. After failing to win a medal at the 2008 Summer Olympics he did not compete on track again until 2015, subsequently winning his third UCI Track Cycling World Championships title with Wiggins in the madison in 2016, and an individual silver medal in the omnium at the 2016 Summer Olympics.

As a road cyclist, Cavendish turned professional in 2005, and achieved eleven wins in his first professional season. Cavendish has won 34 Tour de France stages, putting him equal first on the all-time list, contributing to a third-highest total of fifty-two Grand Tour stage victories. He won the Men's road race at the 2011 road world championships, becoming the second male British rider to do so after Tom Simpson. Cavendish has also won the points classification in all three of the grand tours: the 2010 Vuelta a España, the 2011, and 2021 Tours de France and the 2013 Giro d'Italia. In 2012, he became the first person to win the final Champs-Élysées stage in the Tour de France in four consecutive years.

He won seven Grand Tour stages in 2013, one in 2015 and four in 2016. This included a win on stage one of the 2016 Tour de France, claiming him his first Tour de France yellow jersey of his career. Cavendish crashed with Peter Sagan on stage four of the 2017 Tour de France, forcing him out of the race. Cavendish continued producing good results until August 2018, when he was diagnosed with Epstein–Barr virus. Before his diagnosis, Cavendish was able to compete in the 2018 Tour de France but was disqualified after not making the cut-off time on stage eleven. He returned to the Tour de France at the 2021 edition, winning stage four, stage six, and stage ten to take his total to 33 stage wins, one off the overall stage victory record. Three days later, on 9 July, he won the stage from Nîmes to Carcassonne to equal the record. He also won the points classification ahead of Michael Matthews and Sonny Colbrelli.

In the 2011 Queen's Birthday Honours, Cavendish was appointed a Member of the Order of the British Empire (MBE) "for services to British Cycling." He also won the 2011 BBC Sports Personality of the Year Award with nearly half of the votes going to him out of a field of ten nominations.