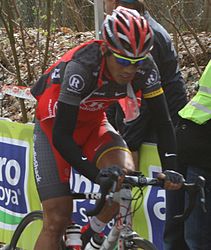 Li rode with Marco Polo from 2005 to 2006, before switching to the Pro Tour Discovery Channel under coach Johan Bruyneel for the 2007 season. The Discovery Channel team was disbanded at the end of the highly successful 2007 season, and Li moved on to the newly re-established China-based Trek–Marco Polo for the 2008 season. In 2010, Li rode the newly formed Team RadioShack, reuniting with Bruyneel.