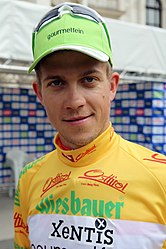 Zoidl left Gourmetfein–Simplon at the end of the 2013 season, and joined Trek Factory Racing for the 2014 season. He was named in the start list for the 2015 Vuelta a España.

In December 2018 the CCC Team announced that they had recruited Zoidl for 2019 as a replacement for fellow Austrian Stefan Denifl, after the team and Denifl had agreed to cancel the latter's contract due to personal reasons.