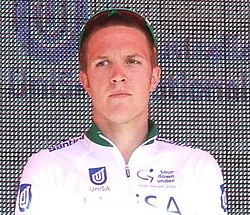 Travis Meyer (born 8 June 1989 in Viveash) is an Australian professional racing cyclist, riding for Drapac Cannondale Holistic Development Team. His first Pro Tour race was the 2009 Tour Down Under. At the beginning of 2010 he was the winner of the Australian National Road Race Championships elite road race. His brother Cameron Meyer is also a cyclist, and was a part of the Orica–GreenEDGE team. After four seasons with Orica–GreenEDGE, in October 2015 Travis' brother Cameron Meyer announced that he had joined Team Dimension Data for the 2016 season.