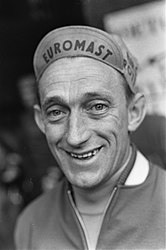 Together with Wim van Est he belonged to the generation that brought great popularity to cycling in the Netherlands in the 1950s. In 1947, Wagtmans started as amateur, and two years later he became Dutch champion. In 1950 he was forced to be a professional cyclist, because he was said to take money after a victory. In his first day as a professional cyclist, he entered the Dutch professional championship, and only Gerrit Schulte could keep ahead of him.

After that, he had a glorious career. He entered the Tour de France eight times, and wore the yellow jersey in 1954, 1955 and 1956. He won four stages: in 1953 in Gap he beat Gino Bartali in the final sprint, and ended fifth in the overall standings. Two years later he was the third Dutch winner in Bordeaux. He also won three stages in the Giro d'Italia and several one-day races. He was also successful as a track rider and, together with Wim van Est, in two-up time trials.

Wout Wagtmans was a very popular cyclist, both because of his combativity and his enthusiasm. He received many nicknames, Olijke Woutje, Dik Trom, Zoeloe, de Clown and het Kemphaantje. He ended his cycling career in 1961, and in 1967 he was the leader of the Dutch Tour de France team, centered on Jan Janssen. After that he took over his father's transport company. At the end of the 1980s, he had a serious accident after which he was declared physically disabled. Wagtmans died in 1994, at the age of 64.

Wout Wagtmans was the uncle of another successful cyclist, Rini Wagtmans.