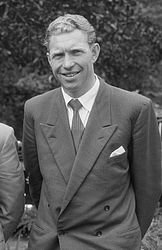 Henk Faanhof (29 August 1922 – 27 January 2015) was a Dutch professional road bicycle racer from Amsterdam. Faanhof won one stage in the 1954 Tour de France. In 1947 Faanhof was disqualified in the Dutch National Road Race Championship after changing bicycles with a teammate. The rule that bicycle changes were not allowed was new and Faanhof did not know about it. He also competed in three events at the 1948 Summer Olympics. Faanhof died in Amsterdam on 27 January 2015, aged 92, less than a week before two other members of the Dutch men's team pursuit squad, Gerrit Voorting and Joop Harmans.