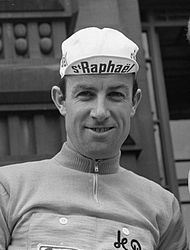 Seamus "Shay" Elliott (4 June 1934 – 4 May 1971) was an Irish road bicycle racer, Ireland's first major international rider, with a record comparable only to Sean Kelly and Stephen Roche. He was the first Irish person to ride the Tour de France, first to win a stage, and first to wear the yellow jersey, and first English speaker to win stages in all the Grand Tours.

After a strong amateur period, primarily with the Dublin Wheelers, Elliott was the first Irish cyclist to make a mark as a professional rider in continental Europe. A late-starting but naturally talented rider, he spent most of his pro career riding as a domestique for team leaders such as Jacques Anquetil, and Anquetil's deputy Jean Stablinski. He came 2nd (to Stablinski) in the 1962 World Road Championship at Salò, Italy.