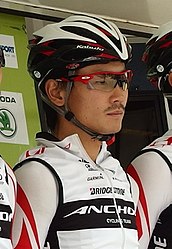 Sho Hatsuyama (初山 翔, Hatsuyama Shō, born August 17, 1988) is a Japanese former professional cyclist, who rode professionally between 2011 and 2019 for the Utsunomiya Blitzen, Bridgestone–Anchor and Nippo–Vini Fantini–Faizanè teams. His first victory in a road race as a professional was in the 2013 Tour de Okinawa, which he won after the first-place finisher was demoted due to rule violations. In October 2015, he won the ninth stage of the Tour de Singkarak. He became the Japanese road race champion in June 2016. In May 2019, he was named in the startlist for the 2019 Giro d'Italia.