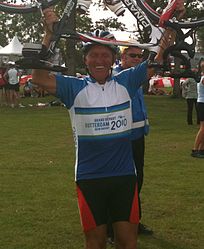 Van der Vleuten was not a team leader, but usually rode his races helping his team mates, mainly Jan Janssen. The major result in his career was winning the points classification in the Vuelta a España in 1966, without winning any stage. He rode the race again in 1967, 1970 and 1972, each time winning one stage. Van de Vleuten also rode the Tour de France six times, never winning a stage.

After the 1967 UCI Road World Championships, where he finished in fifth place, Van der Vleuten tested positive for doping, and was disqualified.