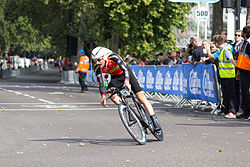 George Richard Atkins (born 18 August 1991) is a British former track and road racing cyclist, who rode professionally between 2014 and 2016. He was a member of British Cycling's Olympic Development Programme. In 2009 he won the junior race at the British National Road Race Championships. At the 2010 Commonwealth Games he won the silver medal in the track points race. After the Commonwealth Games Atkins took a break from the sport but returned in the summer of 2011.

It was announced in October 2013 that Atkins would turn professional for the 2014 season, with Team Raleigh. After one season with Raleigh Atkins was listed as part of the inaugural squad of the ONE Pro Cycling team for the 2015 season.