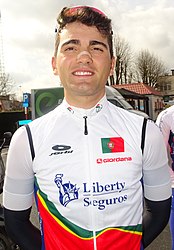 In August 2016, Trek–Segafredo announced that they had signed Guerreiro through to 2018. He joined Team Katusha–Alpecin for the 2019 season, on a one-year contract. In August 2019, he was named in the startlist for the 2019 Vuelta a España.

In October 2020, he was named in the startlist for the 2020 Giro d'Italia. He won the ninth stage and finished the race as the leader of the mountains classification, becoming the first Portuguese rider to win a Grand Tour classification.