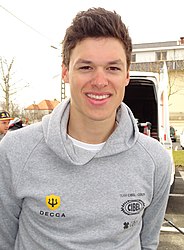 Lawrence Naesen (born 28 August 1992 in Ostend) is a Belgian cyclist, who currently rides for UCI WorldTeam AG2R Citroën Team. He is the brother of racing cyclist Oliver Naesen, who is also a member of the AG2R Citroën Team team.

In September 2017 it was announced that Naesen would join Lotto–Soudal on a two-year contract from 2018. Upon the expiration of his contract, he joined AG2R La Mondiale.