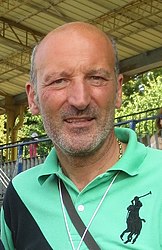 Guido Bontempi (born 12 January 1960 in Gussago) is an Italian former road bicycle racer. Bontempi's career highlights include winning the spring's classic Gent–Wevelgem two times (1984 and 1986) and a total of 16 stages in the Giro d'Italia throughout his career. He also won six stages in the Tour de France and four stages in the Vuelta a España. In the 1988 Tour de France he won the prologue, allowing him to wear the yellow jersey in the first stage. He also won the points classification in the 1986 Giro d'Italia and wore the pink jersey as leader of the general classification for one stage in the 1981 Giro d'Italia. He also competed in the 1000m time trial and team pursuit events at the 1980 Summer Olympics.