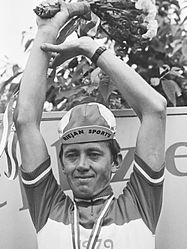 Stamsnijder's greatest success was becoming cyclo-cross world champion in 1981 in Tolosa in the Basque Country. On a muddy course he left the Belgian Roland Liboton and the Swiss champion Albert Zweifel behind him to take the title. Stamsnijder was the first Dutch world cyclo-cross champion and that year he was named sportsman of the year.

Stamsnijder rode the Tour de France in 1980 and 1981, but it was cyclo-cross that brought his greatest victories, winning the Superprestige classification in 1983, 1984, 1987 and 1989 with 14 wins in Superprestige races.

In 1989 Stamsnijder ended his career when his son fell ill. He became the coach of the Dutch cyclo-cross team and is now a manager of Shimano sports marketing. His son, Tom Stamsnijder, is a professional for Argos-Shimano.