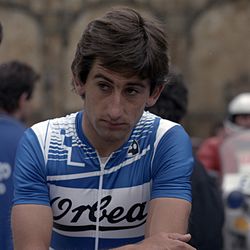 Marino Lejarreta Arrizabalaga (born 14 May 1957 in Berriz, Biscay) is a retired Spanish professional road racing cyclist. His biggest victory was capturing the 1982 Vuelta a España, a Grand Tour stage race, and he is the inaugural and record three-time winner of the Clásica de San Sebastián (1981, 1982, 1987), which is now considered a one-day classic. In 1989, Lejarreta captured the Volta a Catalunya repeating one of his first professional wins in 1980 at the same event.

Lejarreta rode very well in the 1982 Vuelta, but initially finished 2nd to Álvaro Pino while coming in just eighteen seconds ahead of Michel Pollentier. Following the race however, Pino and several other riders failed doping controls in one of the biggest scandals in Vuelta history making the young Basque rider the de facto winner of the race. It was a bittersweet victory as he was not actually the victor riding into Madrid. For the 1983 Vuelta a España he would be up against Bernard Hinault, who had his teammates Laurent Fignon and Greg LeMond, as well as other strong riders including Hennie Kuiper and the Spanish riders of Pino, Alberto Fernández and a young Pedro Delgado who was riding in his second Vuelta. The leaders Jersey changed hands numerous times and Lejarreta held it early while also winning a mountain time trial, but suffered a crash and lost it. During the Lagos de Covadonga stage he escaped from the group of favorites made up of Fernandez, Pino, Hinault, Kuiper and others and soloed to victory, but it was not enough to reclaim the lead. In the end he finished just 1:12 behind Hinault to stand on the podium in 2nd.

Later in his career he would win his only Tour de France stage in a very unusual manner. During the 1990 edition he found himself among the group of favorites as Delgado, Breukink and LeMond were battling the surprising Claudio Chiappucci for the Yellow Jersey. During stage 14 he attacked off the front of the favorites group in an effort to chase down the final few breakaway riders and go for the stage win. When he crossed the finish line ahead of the favorites he did not throw his arms up to celebrate because he did not think he caught the final breakaway rider. With the available technology not giving instant times, results and standings as it does today, it was not as easy to know what was going on from within the race and Lejarreta didn't find out until he came to a stop and was told by his team that he had won the stage.

He would win stages in all three Grand Tours and finish in the top 10 fifteen times: The Giro seven times, the Tour three times and the Vuelta five times including three podium places and a win in 1982.