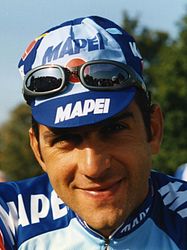 Born in Florence, his greatest exploits as a rider came with his two victories in the cycling classic Paris–Roubaix, riding for the Mapei cycling team. In 1993 he was beaten on the line by Gilbert Duclos-Lassalle in an exciting Paris–Roubaix finale. Also on his palmarès or list of accomplishments there are other one-day races such as Omloop Het Volk and Paris–Brussels.

On 7 February 2010, Ballerini, a rallying fan, was seriously injured during a race in Larciano where he was participating as co-driver/navigator for professional driver Alessandro Ciardi. He later died of his injuries at the Pistoia city hospital. He was 45 years old.

He was honored by race organizers in 2010.