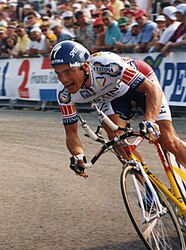 Thierry Marie (born 25 June 1963) is a French former cyclist. Marie often performed well in prologue stages: he won the Tour de France prologue three times in his career, and because of that he wore the yellow jersey in those three years, for seven days in total. He also competed in the team time trial event at the 1984 Summer Olympics. On stage six of the 1991 Tour de France Marie rode alone for six hours and 234 km to win the stage and set the record for the longest post-war successful breakaway.