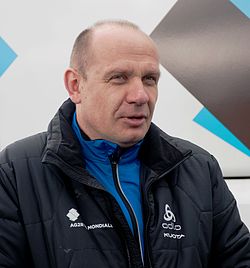 Artūras Kasputis (born 26 February 1967) is a retired track and road racing cyclist from Lithuania, who represented the USSR at the 1988 Summer Olympics in Seoul, South Korea. There he won the gold medal in the men's 4.000 team pursuit, alongside Viacheslav Ekimov, Dmitry Nelyubin and Gintautas Umaras. During the Soviet time he trained at Dynamo sports society in Klaipėda. He was a professional road cyclist from 1992 to 2002, and afterwards became a cycling manager in the professional circuit.