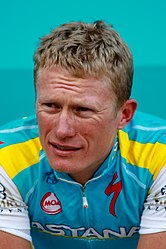 Alexander Nikolayevich Vinokourov (Russian: Александр Николаевич Винокуров; born 16 September 1973) is a Kazakhstani former professional road bicycle racer and the current general manager of UCI WorldTeam Astana Qazaqstan Team. He is of Russian origin. As a competitor, his achievements include two bronze medals at the World Championships, four stage wins in the Tour de France, four in the Vuelta a España plus the overall title in 2006, two Liège–Bastogne–Liège monuments, one Amstel Gold Race, and most recently, the gold medal at the 2012 London Olympics Men's Road Race. Vinokourov is a past national champion of Kazakhstan, and a dual-medalist at the Summer Olympics. In 2007, he received a two-year ban from cycling for blood doping. In 2019, he was accused of race fixing by prosecutors in Liège but was later cleared of the charges.

Vinokourov began cycling in 1984 as an 11-year-old, competing within the former Soviet Union. He moved to France in 1997 to finish his amateur career, and then turned professional there in 1998. After almost a decade as a professional, Vinokourov was caught blood doping during the 2007 Tour de France, which triggered the withdrawal of the entire Astana team from that year's race. After a 2-year suspension from competition, he returned to cycling in August 2009, riding first for the national team of Kazakhstan and then rejoining Astana. A serious crash during the 2011 Tour de France threatened to prematurely end Vinokourov's career for a second time, but he announced he would continue for one more season in 2012 – with an eye towards competing in the Olympic Games in London. There, Vinokourov played the role of ultimate spoiler when he dramatically won the gold medal in the men's road race after breaking away in the closing miles with Colombian Rigoberto Urán.

Vinokourov retired after the Olympics and assumed management duties with Astana for 2013. He was sacked as the team principal of Astana-Premier Tech in June 2021. However, in August 2021 Vinokourov returned as Team manager. He is an honorary colonel in the Kazakh army but lives in France with his wife and children.