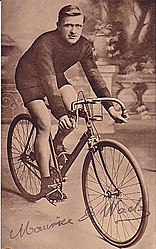 De Waele placed 2nd in the 1927 Tour, an hour and fifty eight minutes Nicolas Frantz and 3rd in 1928, again won by Frantz. However, he is most famous for winning the 1929 Tour de France. He led the Tour until stage seven when two punctures on the way to Bordeaux cost him the yellow jersey to no less than three other rides on the same time in the general classification, Frantz, Andre Leducq and Victor Fontan. Fontan was the sole leader of the race when a broken bike led to his retirement, leaving De Waele in the lead, seventy five seconds ahead of Frantz. However, punctures to De Waele gave the lead to his nearest rival until he too suffered the same problem. With Frantz out of the running for the title, sickness in Grenoble nearly cost him too but with help from his teammates, he was led to victory.

After winning the 1929 Tour, the organiser, Henri Desgrange despaired so much of the trickery that he thought had let such a minor rider succeed that he abandoned commercially sponsored teams and ran the Tour for national teams for two decades. Desgrange had until then insisted that while riders could compete in the name of their sponsors, cooperation or tactics between those riders was not allowed. They were to consider everyone their rival and ride against them whether they had the same sponsor or not.

De Waele was sponsored by the French bicycle company, Alcyon, whose ability to employ many of the leading riders gave it a dominant place in the sport. Clashes between Alcyon and Desgrange were frequent and came to a head when De Waele won the Tour with the illegal help of other Alcyon riders even though he was ill.

"My Tour has been won by a corpse," Desgrange complained and from the following year denied entries to commercial teams and accepted national teams instead.