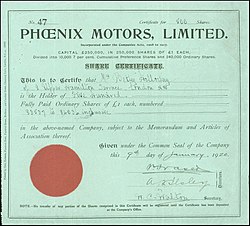 Phoenix was an English manufacturer of automobiles, motorcycles and tricars (motor tricycles) active from 1903–1926. It was founded by a Belgian, Joseph van Hooydonk, at his factory in Holloway Road, North London, and named after the Phoenix Cycle Club.

The company moved from its London base to Letchworth, Hertfordshire, in 1911, but failed to survive the 1920s going into liquidation in 1924 but assembling a few more cars in the following two years.

The Letchworth factory went on to be used for car manufacture by Ascot and Arab.