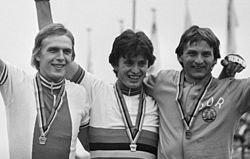 Jan Jankiewicz (born 17 September 1955) is a retired Polish cyclist. In 1979 he won two silver medals in the road race at the World Cycling Championships, individually and with the Polish team. He competed at the 1976 and 1980 Summer Olympics in four events in total. In 1976, he finished in tenth and fifth place in the 4000 m pursuit, individually and with the Polish team, respectively. In 1980, he was fourth in the road race, but failed to reach the finish in the 100 km time trial.

He is married to Marzena Jankiewicz. They have two daughters, Patrycja and Natalia, and live in Wrocław, where Jan works as an entrepreneur.