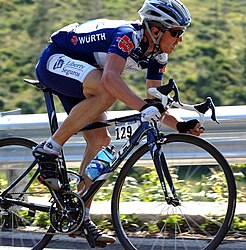 Sergei Yakovlev, (Kazakh: Сергей Яковлев, born April 21, 1976 in Temirtau, Karaganda Region, Soviet Union, now Kazakhstan) is a Kazakhstani (ethnic Russian) professional road bicycle racer. He is currently without a team. He turned professional in 1999 and rode for Besson Chaussures for two seasons, then Acqua & Sapone and then he moved to Team Telekom which became T-Mobile. After fellow Kazakhstani Alexander Vinokourov left T-Mobile at the end of 2005, Yakovlev went with him to Liberty Seguros-Würth team and then the Astana cycling team. Yakovlev's victories include being the national champion of Kazakhstan in 2000, the 2000 edition of the Tour de l'Ain and a stage in the Tour de Suisse.