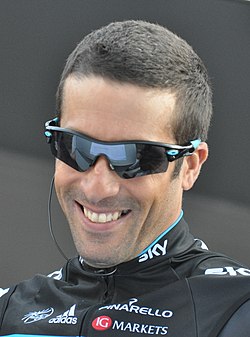 Juan Antonio Flecha Giannoni (born 17 September 1977) is an Argentine-born Spanish former professional road bicycle racer, who competed as a professional between 2000 and 2013. Flecha had a reputation of being a Classics specialist and to ride with an aggressive style as he was keen on participating in breakaways. His major victories include winning a stage of the 2003 Tour de France, successes at the two defunct classics Züri-Metzgete and Giro del Lazio in 2004, and the Omloop Het Nieuwsblad in 2010. He was also known for his numerous high placings in important one-day races, most notably Paris–Roubaix, where he finished in the top ten eight times without registering the victory. In the Grand Tours, he was often assigned to a role of domestique.