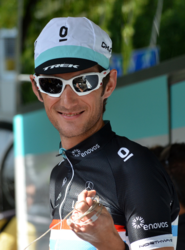 Schleck's greatest achievements include five national road race championships, winning the Queen stage of the 2006 Tour de France, which finished on the Alpe d'Huez, the 2006 edition of the Amstel Gold Race classic, and an alpine stage of the 2009 Tour de France, finishing in the sole company of his brother Andy and Alberto Contador. On 30 January 2013, Schleck was suspended for 12 months following a positive test for xipamide at the 2012 Tour de France. The ban, backdated to the date of the positive test, expired on 13 July 2013.