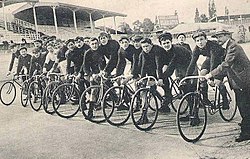 The first documented deaths of competitive cyclists during competition or training date to the 1890s and early 1900s when the recently-invented safety bicycle made cycling more popular, both as a sport and as a mode of transport. The athletes listed here were either professional cyclists, pacemakers, or well-known competitive amateurs who had a cycling-related death, mostly during a race or during training. Pacemakers are motorcyclists utilized in motor-paced racing, riding motorcycles in front of their cycling teammates to provide additional speed to those cyclists via the resulting slipstream.

Safety has been a concern since cycling's early days. By 1929, at least 47 people had died while racing at velodromes – 33 cyclists and 14 pacemakers. Motor-paced cycling still exists in the modern era as keirin racing and derny racing. A number of professionals and competitive amateurs have been killed in accidents with motorized vehicles while training on public roads plus there is a growing number of cyclists who have died of heart attacks while cycling in a race or while training. Some of these deaths affect cycle racing afterwards – the death of Andrey Kivilev in a crash during the 2003 Paris-Nice race caused the Union Cycliste Internationale to institute a mandatory helmet rule.

The dangers of the various sporting forms of cycling continue to be an issue, including training on public roadways. A survey of 2008 Olympics teams, however, indicated that cycling was not even in the top six most injury-prone sports during competition that year. Racing cyclists who have died during a race or during training are remembered by cycling aficionados and the cycling press. Their personal effects are exhibited in museums, their cemetery markers and tombstones are visited by fans, and as one commentator wrote: "Plaques, statues and shrines to cycling's fallen heroes are scattered all over Europe's mountain roads, turning any ride into a pilgrimage."