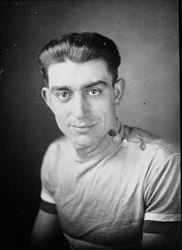 Antonin Magne (pronounced [ɑ̃.tɔ.nɛ̃ maɲ]; 15 February 1904 – 8 September 1983) was a French cyclist who won the Tour de France in 1931 and 1934. He raced as a professional from 1927 to 1939 and then became a team manager. The French rider and then journalist, Jean Bobet, described him in Sporting Cyclist as "a most uninterviewable character" and "a man who withdraws into a shell as soon as he meets a journalist." His taciturn character earned him the nickname of The Monk when he was racing.