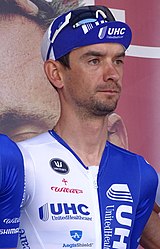 Davide Frattini (born 6 August 1978 in Varese) is an Italian former cyclist. He was raised in a cycling family where his father was sports director at a local club. Since childhood, he followed his brothers Francesco Frattini and Cristiano Frattini, who were also professional cyclists. In 2001, after earning his degree, he won the Baby Giro. The following year he turned professional with the team Alessio-Bianchi.

Frattini announced his retirement from competition in October 2015.