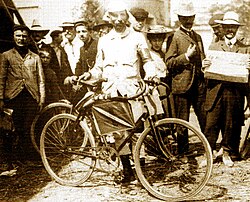 At the age of 48, after the German invasion of Belgium at the beginning of the First World War, Kerff was assumed to have been spying on German soldiers and was subsequently hung.

A monument memorializing all Belgian cyclists that died during this war was erected later on in Moelingen near the place where he died.