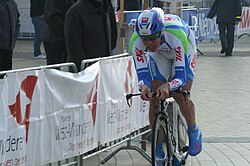 Born in 's-Hertogenbosch, van Zandbeek competed as a professional between 2011 and 2015, joining the Skil–Shimano team full-time after a stagiaire contract with the team in the second half of 2010. Having previously won the Tour de Normandie as an amateur in 2010, van Zandbeek won his first professional race in September 2012 as he won the Kampioenschap van Vlaanderen event. Van Zandbeek had accelerated away from five other riders in the closing stages of the race.