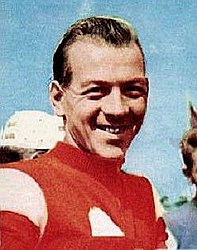 Joseph Groussard (born 2 March 1934 in La Chapelle-Janson, Brittany, France) is a former French professional road bicycle racer. Groussard was professional from 1954 to 1968. He rode 9 editions of the Tour de France where he won one stage in the 1959 Tour de France and wore the yellow jersey as leader of the general classification for one day in 1960 Tour de France. Other victories include two wins in Paris–Camembert, stage wins in Paris–Nice, wins in Critérium International and Four Days of Dunkirk and the 1963 edition of Milan–San Remo. In 1965, Groussard became the Lanterne rouge (last finishing rider) in the 1965 Tour de France.