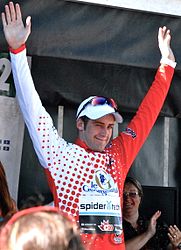 Hugo Houle (born 27 September 1990) is a Canadian professional cyclist, who currently rides for UCI WorldTeam Astana–Premier Tech. In 2012, Houle won the general classification of the Tour de Québec as well as a stage while he was riding for SpiderTech–C10. Houle acts mainly as a domestique for the French outfit. In 2015, he participated to his first Grand Tour, the Giro d'Italia. He won the 2015 Canadian Time Trial Championship over Ryan Roth and Christian Meier.