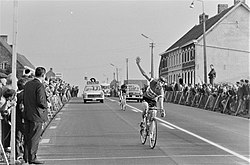 In his 1999 book, Breaking the Chain: Drugs and Cycling, the True Story, Belgian sports physiotherapist Willy Voet described an incident involving Van Vlierberghe that occurred during the 1979 Deutschland Tour. Voet, then the soigneur with Van Vlierberghe's team, Flandria, claims that Van Vlierberghe, "a decent Belgian racer but with no taste for the hills," asked Voet to drive him ahead of his fellow racers to avoid a six-mile stretch of hill in the course. Voet claims that Van Vlierberghe slipped back into the race without being detected and went on to place sixth on the stage. Voet used the incident to defend his assertion that for many professional riders at the time, cheating was "a way of life."