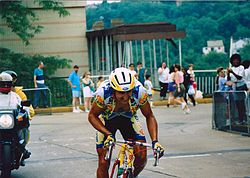 Clarence "Roy" Knickman (born June 23, 1965) is a former professional road bicycle racer from the United States, who won the bronze medal in the Men's Team Time Trial at the 1984 Summer Olympics. His teammates in Los Angeles, California were Ron Kiefel, Andrew Weaver, and Davis Phinney.

Knickman rode in the 1988 and 1989 Tour de France for Team 7 Eleven. He memorably featured in one of the greatest breakaways in the history of Paris–Roubaix in 1988.

During his professional career, Knickman rode for the famous teams of La Vie Claire, Toshiba-Look (alongside Greg LeMond, Bernard Hinault and Andrew Hampsten) and 7-Eleven.

He originally retired from competition at the end of 1993 to take up coaching, serving as coach of the US national junior team in 1994 and the US national and Olympic road team from 1995 to 1997. However he returned to riding with the Mercury team in 1998, combining it with the role of Assistant Manager until 2000. He subsequently worked in management for the Autotrader.com and Prime Alliance teams. More recently he has coached cyclists Kendall Ryan, Alexis Ryan, Magnus Sheffield and Quinn Simmons.

He later became a firefighter in Paso Robles, California.