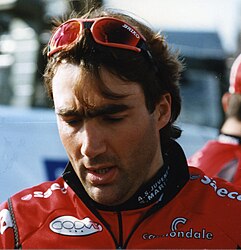 Giovanni Fidanza (born 27 September 1965 in Bergamo) is an Italian former professional road bicycle racer, who competed professionally between 1989 and 1997. In the 1989 Giro d'Italia, Fidanza won the points classification. Fidanza also won a stage in the 1989 Tour de France. He now works as a directeur sportif for UCI Women's Continental Team Isolmant–Premac–Vittoria, for whom his daughters have been members; Arianna Fidanza previously rode for the team, and Martina Fidanza currently rides for them.