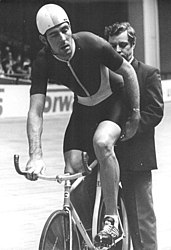 Jens Lehmann (born 19 December 1967) is a German politician of the CDU and a former professional cyclist and double Olympic champion. Despite his many successes (including being part of the first team pursuit squad to break the 4-minute barrier for the 4,000-metre team pursuit), he will probably be remembered best as the person caught by Chris Boardman riding the revolutionary Lotus Superbike, in the final of the 1992 Olympic individual pursuit in Barcelona. Lehmann was World Champion at that time.

In the 2017 German federal election, he was elected as member of the Bundestag for Leipzig I.