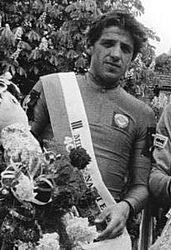 Asyat Mansurovich Saitov (Russian: Асят Мансурович Саитов; born 1 January 1965) is a retired Russian cyclist. He missed the 1984 Summer Olympics due to their boycott by the Soviet Union and competed at the Friendship Games instead, winning a silver medal in the team road race. The same year he won the Tour of Greece and Olympia's Tour. He also won the GP Cuprosan in 1991, Vuelta a Castilla y León in 1992, Vuelta a Mallorca in 1993 and Gran Premio de Llodio in 1994.

In 1988 he competed at the Summer Olympics in the 100 km team time trial and in the individual road race and finished in seventh and 51st place, respectively.

He is married to Svetlana Masterkova, a Russian Olympic middle distance runner.