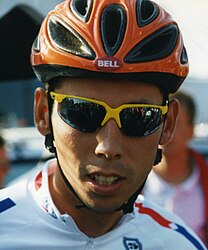 Damien Nazon (born 26 June 1974) is a former French racing cyclist. He finished in last place in the 1998 Tour de France. Nazon took a total of 33 victories during his career, including stage wins in the Dauphiné Libéré, the Grand Prix du Midi Libre, the Critérium International and the Tour of Belgium. Nazon rode for the Castorama team as a stagiaire in the autumn of 1995, before turning professional with Banesto in 1996. He then rode for Française des Jeux for three years, Bonjour for four and ended his professional career in 2005 after two years with Crédit Agricole.

He is the brother of former racing cyclist Jean-Patrick Nazon.